Things started well. Kira is earning $4,081 per week with her books, so she can finally afford to start buying some nicer things. 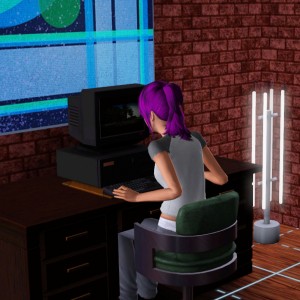 She was also able to hire maid service. I guess the house was messier than I thought, because they sent two maids. 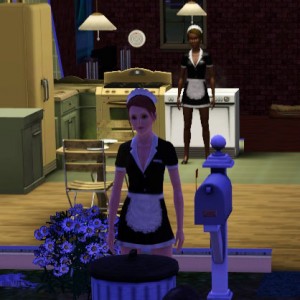 Then another flea infestation hit, and Kira’s cats still didn’t like her enough to let her bathe them, so they all had to suffer.

This led me to decide that I needed to have one of the cats earn 10,000 Lifetime Happiness Points so that we could buy a Pet Hygeinator, which is like a car wash but for cats.

I started with French Fry, since he had the highest number of Lifetime Happiness Points. 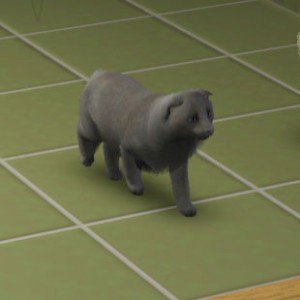 The problem with pets is that they don’t get Wants very often, so you have to watch them closely. I was trying to juggle watching French Fry and making sure Kira kept working on her novels, while one of the other cats (Olive) kept going into the red.

Olive needed to scratch and eat and pee, but every time I sent her to do one of those things, one of the other cats was in her way. It was a pathing problem, which happens from time to time. But, distracted as I was, I let it go on for far too long.

Then Animal Services showed up and took all the cats away. 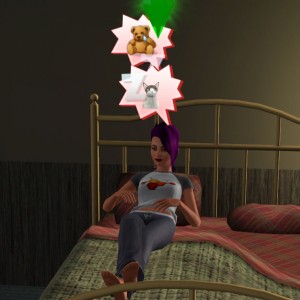 Kira pined for her cats. I tried to readopt them from the shelter, but she has to wait seven days until she can adopt again. In the mean time, her cats have all been re-homed, so she can’t get them back.

Then a stray cat showed up on the property, and I was very happy. 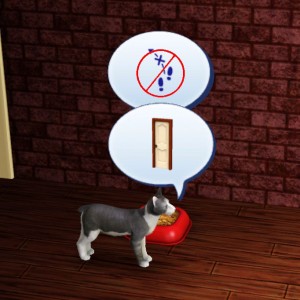 Except the stray cat had a permanent pathing glitch, and I couldn’t reset him, and moving him with the MoveObjects cheat didn’t work, so I had to delete him. **cries forever**